Posted by kog4jc on December 28, 2015 in Uncategorized |No Comments 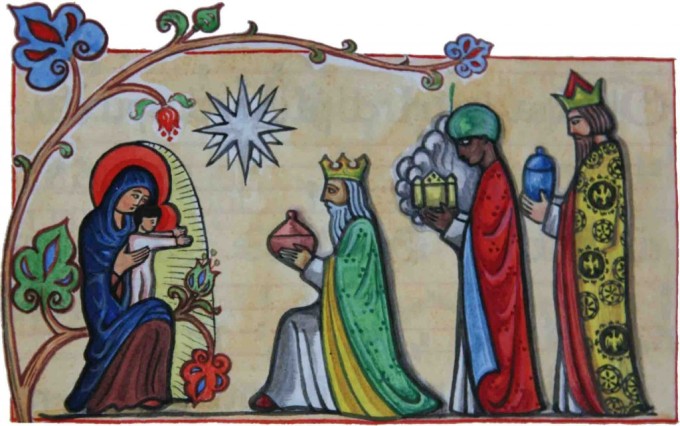 The Jewish people had been waiting 400 years for the predicted Messiah by the time Matthew opens up his story. They were expecting a messiah, a King, a ruler, but perhaps not a ruler like this.  As the old hymn Come, Thou Long Expected Jesus puts it, Jesus was “Born a child and yet a king.”  Indeed, the wise men say that He was not born to become King of the Jews; Jesus was King from His birth. This is a little unexpected at least from the point of view of  King Herod, this despot, placed in power by the Romans. To have an infant called the rightful ruler of his domain has to be more than a little infuriating. And while Luke tends to focus on the Holy family, and on Mary in particular, Matthew focuses on these unexpected visitors to Jesus. These “wise men.”

We don’t know their names. We don’t know how many wise men there were. The assumption is there were three, because three gifts are offered to Jesus. And while “wise men still seek him” as the catchy Christmas slogan goes (it is a witty saying), the translation “wise men” isn’t the most accurate translation. A better translation would be “pagan astrologers” or “pagan magicians.” These guys were most likely from Persia, modern day Iran, and were most likely not Jewish. And even though they are largely ignorant of the God of Israel, their worship is genuine. They come with reverence, they fall to their faces, they give out of their treasure: gold, frankincense, and myrrh. Scholars believe that Matthew might be interpreting the gifts to symbolize royalty (gold), divinity (frankincense, which was often used in burnt offering), and burial (myrrh), which was used at Jesus’ burial. But the astrologers were just giving sacrificially what they had in an act of worship. They didn’t  know everything about who Jesus was. Certainly Joseph and Mary had no warning that these strangers from another land were coming to give these gifts to them. Some scholars suggest Joseph and Mary used these unexpected gifts to finance their unexpected trip to Egypt to escape the wrath of King Herod, who sought not to worship the baby King but to kill him.

The Magi brought Jesus expensive gifts fit for an earthly King because that is all they knew how to do. Their worship, while being sacrificial, was also short and temporary. When they returned home, they probably went back to worshiping other gods. They probably went back to searching the stars for meaning even though the Star pointed them to Jesus. They came bringing gifts. But perhaps they were the ones who would have received an unexpected gift if they had stuck around long enough to get to know Jesus.

We come to God intimidated. Thinking that we have to bring something to the table to satisfy Him. That is sort of the theme of the classic song, “Little Drummer Boy.” How do the lyrics go again?

“I am a poor boy too, pa rum pum pum pum

I have no gift to bring, pa rum pum pum pum

For ages, people have come to gods thinking they have to give something to get something. They give their treasures and give their tithes, not realizing that in reality, the Lord gives the greater gifts. In this season of giving, I wanted to shift our attention away from material gifts and talk about spiritual gifts. As Paul says in 1 Corinthians 12, “Now concerning spiritual gifts, brothers, I do not want you to be uninformed. You know that when you were pagans you were led astray to mute idols, however you were led.” Paul would be glad that the Magi were seeking Jesus. That they made the long journey to see Him. They had more sense than King Herod, who claimed to be a Jew, but sought to kill Jesus the true King of the Jews. But Paul would not want the Magi to turn back. To return to their false idols that do not speak. He would not want them to see Jesus as one God among many. He would not want them to go back to their pagan statues to sacrifice. He would not want them to worship lifeless gods that they gave, gave, and gave to without ever hearing a word in reply. Paul tells us that is not how our God is. Instead, God gives us what can be translated as “gifts of grace.” Gifts we don’t deserve, but gifts that provide for everything we need. Wisdom, knowledge, faith, healing, miracles, prophecy, discernment of spirits, tongues, and the interpretation of tongues. This is not meant to be an exclusive list of spiritual gifts but just some examples. All these gifts are given by the same Spirit. Maybe the Corinthians didn’t expect these gifts when they started on their Christian journey.  Maybe they silently wondered if Jesus was like all the other idols they had worshiped, silent, and powerless.

My premise today is that God doesn’t want your gold, frankincense, and myrrh. God doesn’t want you to just stop in on Sunday and worship Jesus and then go back to where you came from. Instead, God wants to give us amazing gifts. But those gifts are not given to individuals. I just can’t get the gift of healing or prophecy because I think it would be cool. Instead, Paul tells us that the gifts are given for the “common good.” Gifts are given for community. The Greek word is Koinonia. It literally means “sharing everything together.” It means moving from coming to Jesus on Sunday to offer our gifts, to dwelling with each other as a community, as a family. And as we dwell in Christ’s love, Christ will strengthen us with spiritual gifts. Many of the gifts we won’t see coming. But all of them will make us stronger. All of them will make us a sign of grace to our community.

Jeff Vanderstelt, author of Saturate: Being Disciples of Jesus in the Everyday Stuff of Life, tells of his evangelism strategy for starting a new worshiping community near Seattle.  They had poker parties. They offered food and poker (low stakes, of course) and people came. They made time for each other. Time to play, time to celebrate, time to feast.  To quote Vanderstelt, “Together we started to imagine what the church would be like if we all believed we were a picture of God’s kingdom breaking into the world in ways that felt like a party.”

I got to admit, you guys know how to throw a party. There are some fun loving people in this congregation. We have Chicken Pie, go kart racing, chili cook offs,  Halloween Extravaganzas, and a good time on the golf course. But a lot of us are also busy, so we don’t take the time to get to know our neighbors and even our fellow church members like we should. Some of us, like myself, are not the most extraverted people in the world, and are afraid of taking on the task of hosting a lot of people. But if we commit some time to gather together and share life together, then I guarantee you, we will receive something more valuable than gold, frankincense, and myrrh. We shall receive spiritual gifts. We shall receive unexpected blessings.

When I think about someone who received a lot of spiritual gifts over the course of their lifetime, I think about Betty Cone. Many of you know Betty. She is one of our congregation members who is unfortunately not able to be with us because of physical limitations. I go to see her once a month to talk with her and give her communion. Betty’s memory isn’t what it used to be. But she always tells me she is blessed. And though her memory is not great, the one thing she always remembers is “Cone’s Court,” the home she and her husband Charles lived in. From what I understand, the Cone house was a bit of a watering hole in the community, both figuratively, in that a lot of young people gathered there, and literally, in the fact that a lot of young people gathered there because there was a pool. One Sunday, Betty counted over twenty kids at their house.  Betty always tells me that she always knew where her kids were and everyone else’s kids where as well. It always strikes me what we remember when we start to lose our memory.  We usually don’t remember what the world considers important: money, status, the newest hot Christmas item. We remember those moments where we are touched in the depths of our humanity, in the depths of our Spirits.

We don’t seem to have as many of those moments as we used to, do we? There are not many watering holes like “Cones Court” left in our community, or in most communities in America.  We spend most our time working and transporting our kids to the next event, and before we know it, the kids are gone and we are wondering where the time went.  Perhaps we all need to realize you can always earn more money, win more trophies, add more to your college resume, but you can’t get the time back, you can’t get those moments back.  And at the end of the whirlwind of raising kids, making enough money to retire, or being successful in our careers, I think many of us might have regrets that we didn’t take that time to have koinonia, to have true fellowship, to stop being nomads and settle down arm in arm at the feet of Jesus.

You know, I have visited Betty over a dozen times by now. And she has never once expressed a regret about her life, even though her beloved Charles has gone to be with the Lord.  And though her memory has faded, I find it fascinating that what she remembers is community. She remembers it, I think, because in community she received so many spiritual gifts. And if we embrace each other, we too shall not have any regrets. We too shall receive unexpected gifts.